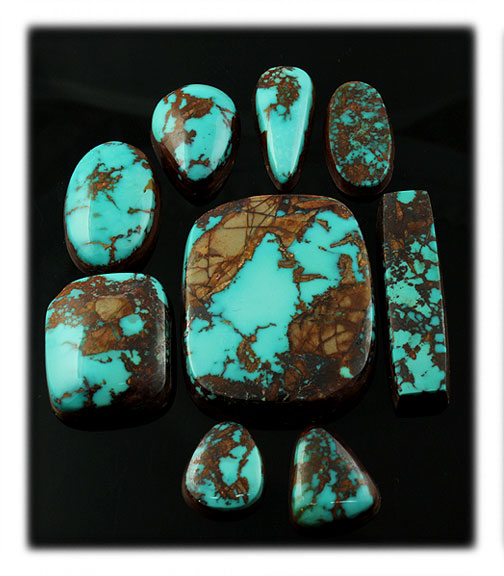 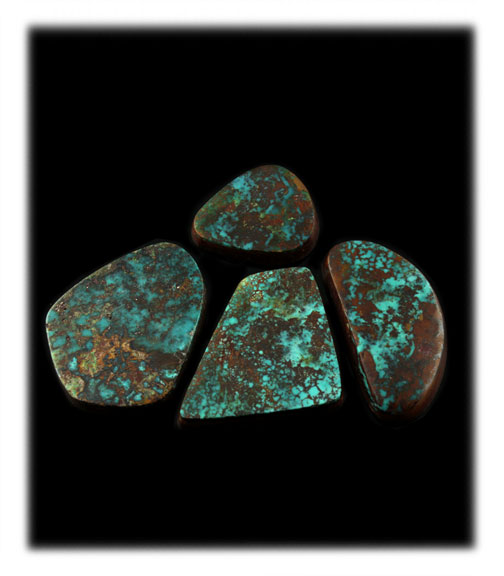 The Pilot Mountain Turquoise Mine is located in western Nevada. It first began as a copper mine. Soon after it was realized that the Turquoise found there was extremely high quality and more fertile than the copper. Copper mining ceased and the mine was claimed for mining Turquoise instead. Pilot Mountain Turquoise is known world wide for it vast array of colors and quality. William Miller of Tonopah discovered the Montezuma in 1905. Today these claims are owned by several different families. The two main families working the Pilot Mountain mines are the Wilson and the Cordova Families of Colorado.

This Nevada mine is one of the gem mines made famous for its extremely rare ability to form dendrites (manganese plant fossil replacements) in the Turquoise. The Pilot Mountain mine also produces some very high grade spiderweb stones, with interesting web matrix patterns that include red, brown, and black colors. It is a hard stone and so it takes a good shine that retains color longer and is resistant to skin oils. The Pilot Mountain claims produce Turquoise that looks like other famous mines, especially the Royston Turquoise mine, however, most of the material from the Pilot Mountain mine is very unique and easy to pick out from cabochons cut from stone mined elsewhere.

Turquoise Bonanza - The Turquoise Bonanza mine is located on the west side of Pilot Mountain about 2.5 miles north of the Pilot Mountain mine in Mineral County in west-central Nevada and east of the town of Mina. The first discovery here was made in 1908, but significant mining did not begin until 1943. Ted Johnson and others did considerable work mining here from the 1950s through the 1970s. Total turquoise production is estimated at about $400,000 worth of rough. The mine has produced a wide range colors, including blue, blue-green and green. The Turquoise occurs in veins up to 2 inches wide in an altered, fractured quartzite. Much of the vein or slab material has an attractive matrix pattern, and spiderweb material does occur here. Nuggets of turquoise are rare at this location. The turquoise is hard, of good quality, and takes a good polish. There are more than 20 individual deposits on the property and each contains a distinct variety of turquoise. 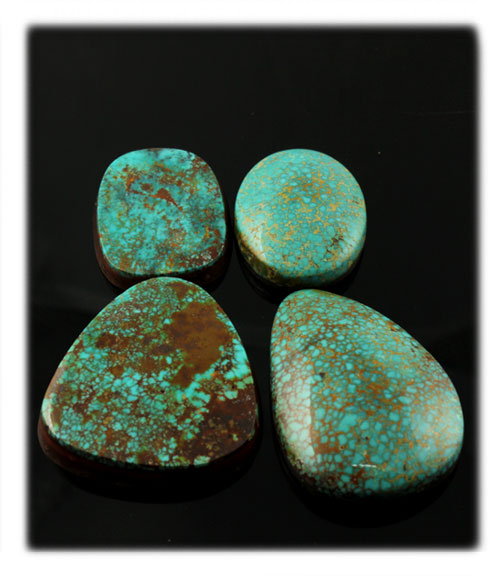 Blue Eagle - The Blue Eagle area is located about 2 miles west of the Pilot Mountain Turquoise mine. A series of moderate sized open pit excavations were worked by bulldozer during the period of high turquoise demand in the 1960s and 1970s. The area was little worked before that time. One of the Mines here produced very unusual turquoise pseudomorphs where the material assumes the form of another mineral crystal (usually apatite). The Blue Eagle mine had recently been re-claimed by the Otteson family and is being worked today. The Blue Eagle mine is producing beautiful blue nuggets the resemble Arizona Turquoise.

The Halley's Comet Mine is located near to the Pilot Mountain area at the southern end of the Excelsior Range about 10 miles SW of Mina. It has produced a small amount of both varicite and turquoise, much of the material is very bright green in color. The Halley's Comet Turquoise mine was named after the unique Turquoise there that has gray agate inclusions which are usually in a triangular shape and scattered through the Turquoise like the tail of a comet. This mine is currently owned by Nevada Turquoise Company.

Thank you for taking a look at our page on Pilot Mountain Turquoise.