Santo Domingo Pueblo and its Jewelry

Santo Domingo Pueblo is located in Sandoval County, New Mexico, about 25 miles (40 km) south of Santa Fe. In the last US Census, the population was 2,550. Most of the residents of the Pueblo are Native Americans who speak a dialect of the Keresan Language.

According to material about Santo Domingo in a display at the American Museum of Natural History, the pueblo "... is admired for clinging strongly to its traditions. Its pride, conservatism, and relatively large size, have produced a solid core (of traditionalists) committed to maintaining (the old) ceremonies and beliefs." They are admired for their traditional bead jewelry and turquoise bead jewelry. Santo Domingo Beads are highly revered and made in the traditional ways of the Anasazi.

Santo Domingo Pueblo is named for St. Dominic, and the village celebrates an annual feast day on August 4th of each year to honor him. On that day, more than 2,000 residents of the Pueblo and of other pueblos participate in traditional corn dances. Visitors are welcome to visit at all times to learn about traditional pueblo life. There is a museum and cultural center there with a good deal of historical information and displays.

The word "Heishi", is from the Keresan word meaning "shell," and traditionally referred to shell beads. Today, however, it describes tiny, flat handmade beads of any material. In ancient necklaces made by Anasazi, a necklace might contain thousands of beads. In the old days, each bead began its life as a rough shell fragment, which was drilled with a cactus needle and sanded with hundreds of other fragments on a foot-powered stone wheel. Modern innovations include power tools and large beads featuring inlaid patterns of other stones. Many other tribes, especially the Zuni, purchase Santo Domingo Heishi and incorporate it into their own work. When you take this into account there is a lot of jewelry out there that is at least partly Santo Domingo Jewelry. 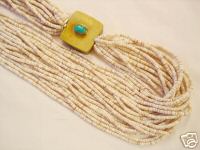 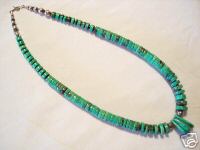 Shell mosaic is a trademark style of Santo Domingo jewelry, drawing on a tradition dating back many centuries. Many modern Pueblo artists consciously style their inlaid jewelry after styles and patterns unearthed by archaeological research, found in rock art or on display in museums.

The necklace shown in Figure 4 is an old inlaid shell combined with modern beads by a Santo Domingo artisan. 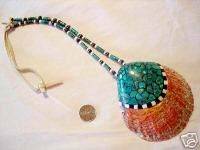 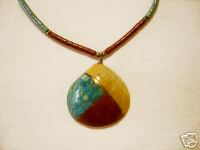 Not all Santo Domingo inlay is based on ancient traditions. Modern inlay artists break from the past by using nontraditional colors such as green and purple, materials such as plastic and imagery such the U.S. flag.

"Depression" Necklaces originated in the 1930s, but were sold well into the 1960s. I used to buy one every year at the Pow Wow in my home town of Flagstaff, Arizona. These necklaces were made of found materials and were the first jewelery items for which the Santo Domingo Pueblo became well-known. In the illustration below, the red typically came from red plastic dinnerware or Dairy Queen spoons. Plastic from car batteries or old records was used for the backing. These necklaces used to be sold by the roadside for a dollar or two. They are now quite expensive, and one in pristine condition can go for well over a thousand dollars. 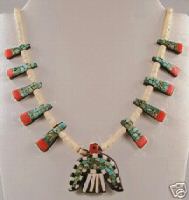 Slab necklaces are cut from slabs of gemstone and are a fairly recent addition to the Santo Domingo creative repertoire. These necklaces could not have been made without modern technology because they require large slabes of gemstone that must be stabilized for strength. 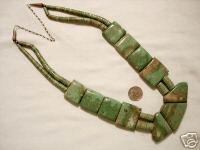 For religious reasons, the Santo Domingo people do not carve detailed models of living things for their jewelry. Their fetish carving is mostly limited to stylized birds, as shown in Figure 8. 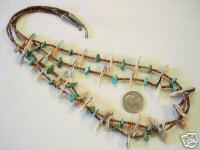 Recently, on eBay and other online venues, there has been a proliferation of fetish necklaces advertised as "Santo Domingo Fetish Necklaces", some for quite high prices. Most of them are imported from the Philippines, and most fall into one of two categories: Stack necklaces with various centerpieces and thunderbird necklaces strung with pin shell beads and various animals. When shopping for fetish jewelry, it's good to remember that these necklaces have little or no value. Two examples are shown below. 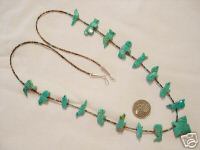 Back to the Jewelry Learning Center | Thank you for reading our brief information about Santo Domingo Jewelry.