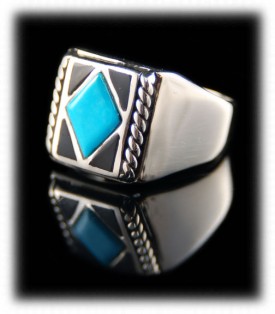 Below are several examples of Mens Silver Bands that you can find at Durango Silver Company.

Above and to the left is a Lost Wax Style mens silver band ring by Crystal Hartman. This is a smooth and sleek Mens Silver Band that can be worn by men or women. This would be a unique choice to use as a modern mens silver wedding band. Durango Silver Co always has these type of one of a kind wedding style mens silver bands.

We have been creating our unique Saddle style Mens Silver Bands since the 1970's when we dealt in Silver Saddles and American Frontier Cowboy items. This unique Mens Ring is like no others as John was a horseman and designed it to fit a gentleman's finger like a saddle fits a horse - and it does!

To the right is gorgeous example of the Mens Silver Bands we make with purple Sugilite gemstones. This particular Sugilite and sterling silver band ring is very modern and sleek and is a good example of our modern mens silver bands that fall into the inlay jewelry category. Many artists make Mens Silver Bands with all different kinds of colorful gemstones. Having said that, Sugilite is one of the rarest gemstones on earth and is not commonly found in mens silver bands today.

Above and to the left is a Mens Silver Band Ring by Dillon Hartman. This mens silver band ring has gorgeous rectangular Bisbee Blue Turquoise stones inlaid all around the Sterling Silver band. This mens inlay Turquoise ring features a comfort fit band. This Mens Band Ring was handmade in Durango, Colorado by Dillon Hartman and is hallmarked “Dillon” and “Durango Silver .925”. You can see more photos of this inlaid Mens Band Ring on its presentation page by following this link.

To the right is a Mens Silver Band created in the saddle design by a modern Zuni Native American artist. This Mens Silver Band Ring has a square look and is inlaid with multi color earth tone gemstones in a geometric pattern. This fancy inlay pattern is set in a sterling silver bezel atop a simplistic and modern Silver saddle mens band ring. This is a wonderful example of the modern mens silver bands that we offer and that define modern day Zuni Inlay Jewelry. You can view additional photos of this Silver Saddle Ring on its presentation page.

To the right is one of our most popular Mens Silver Bands which is inlaid with a highgrade natural Bisbee Turquoise cabochon. This is a great example of the type of Bisbee Turquoise Mens Silver Bands that will be in style for decades and are considered contemporary classics. This particular mens silver band ring is sleek and is the perfect weight which makes it a perfect ring for daily wear. 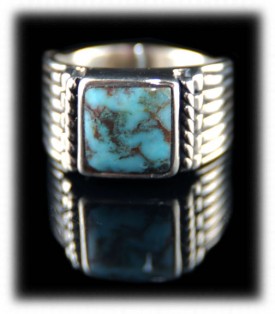 Look at the wonderful natural Dry Creek Turquoise cabochon that adorns this modern Mens Silver Band ring. This a great example of the quality of Turquoise and the type of mens silver bands we are known for.

We hope you liked this informational presentation on Mens Silver Bands and have gained some useful knowledge from it. We invite you to learn more about Native American Jewelry and Sterling Silver Jewelry by following the links in our Learning Center to other informational pages that we have written on different topics related to Silver Mens Silver Bands. In addition, we would like to invite you to join our E-Mail Newsletter - about once every other month we send out a Newsletter to inform our members of what's happening with Durango Silver Company, new products, specials for our members and more. We also have a monthly drawing from our member base to give away free Silver Jewelry from our company. Please take a moment to become one of our friends by signing in below.