Anasazi Turquoise - Once upon a time the Anasazi had trade routes that spanned the western part of North and Mesoamerica. They traded ancient Turquoise for Parrots, Seashells and other trade items brought from Mexico and California by nomadic trade groups. The Anasazi owned Turquoise and copper mines that gave them valuable goods for trade. Archaeologists have found Anasazi Turquoise and copper in Mexico Ruins as well as Parrot Feathers and Seashells from the Gulf of Mexico have been found in the Anasazi Ruins.

The Anasazi culture began in the Southwest in approximately 350 B.C. and it lasted until about 1450 A.D. Anasazi people began hunting for and mining Anasazi Turquoise as early as 200 B.C. It is believed they mined Anasazi Turquoise to supply artisans with gemstones to carve and grind into mosaic pieces to apply to seashells that were traded from the Mesoamerica. Anasazi people mined Turquoise at what we now know as the Conejos area of Colorado, at Cerrillos, in the Burro Mountains, and at Chaco Canyon in New Mexico. The artisans carved the stones and used them to make beads and as a material for mosaic inlays for spiritual amulets. The Anasazi Indians also mined Turquoise for trade. Turquoise stones from ancient Turquoise mines at Cerrillos have been found in multiple Aztec archaeological sites in what is now Mexico. Turquoise Stones that the Anasazi mined in Chaco Canyon were traded have been found as far away as Chichen Itza, which was the greatest Mayan City of those times located on the Yucatan Peninsula.

Turquoise commerce became very important and at its height, approximately 1000 A.D., the highly controlled Cerrillos Turquoise mines were the major source of wealth of the Anasazi civilization. Chaco Governors had taken control of the Turquoise Mines at Cerrillos by this time and raw Turquoise was brought to Pueblo Bonito to be cut into beads, amulets and small pieces to be used for mosaics. Mesoamerican merchant-traders took Turquoise from the Anasazi's back to their homelands for use in jeweled and mosaic creations by Mayan Artisans as well amulets and other items. Nomadic Traders for the Toltec merchants in central Mexico visited the Anazazi’s regularly as trade from the Southwest to Mesoamerica had become brisk.

Shortly after 1000 A.D. the peoples of western Mexico discovered how to work with metals and began making copper bells and other metal trade items to send with traders up the coastline and across the Sierra Madre to trade for Turquoise with the Hohokam and the Anasazi Indians in exchange for their metal works.

By 1200 AD, the Chaco Canyon center and most of the settlements of the Anasazi civilization were entirely deserted. They moved to the Rio Grande Valley and a few other desert river areas of, what we now call New Mexico, to establish several Pueblos.

The great Turquoise road over the Mexican High Sierra was soon forgotten, except for Mexican rumors of the Spaniards and the 7 cities of gold to the north. 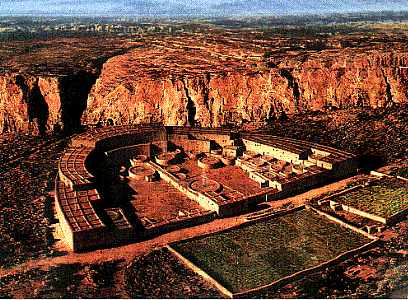 The above photo is a recreation showing Pueblo Bonito as it must have looked at the height of the Anasazi Turquoise trade period of 1000 A.D. Pueblo Bonito was abandoned around 1300 AD. At that time, about 1,000 people lived in the 600 rooms in the Pueblo. The Pueblo had terraces where Medicine Men as well as visitors to the Pueblo would gather for religious and trade events. It is a fact that a Medicine Man had no power or influence if he was not well decorated in Turquoise.

Below, amulets of Turquoise have been found in Yucatan tombs. It is believed the many pieces of Turquoise found in the sacred well of Chichen Itza were thrown there as propitiatory offerings to the gods. This famous pyramid is called Temple de Kukulkan, at the center of the Temple is a throne in the shape of a jaguar painted in red with inlays of jade and shells. On the top of this throne an offering of corals, silex knives and a disc ornamented with Turquoise mosaics. 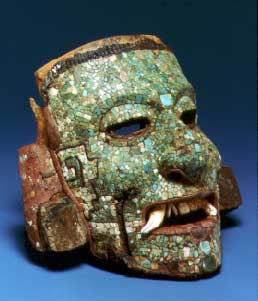 We hope you have enjoyed our presentation on Anasazi Turquoise and have gained some useful knowledge from it. We invite you to learn more about Turquoise and Turquoise Jewelry by following the links in our Learning Center to other informational pages that we have written on different topics related to Turquoise Jewelry. In addition, we would like to invite you to join our E-Mail Newsletter - about once every other month we send out a Newsletter to inform our members of what's happening with Durango Silver Company, new products, specials for our members and more. We also have a monthly drawing from our member base to give away free Turquoise Jewelry from our company. Please take a moment to become one of our friends by signing in below. - See more at: http://www.durangosilver.com/anasazi-turquoise.html#sthash.NrjfHVdT.dpuf