TURQUOISE - The production of turquoise from deposits in California turquoise can be traced back to pre-Colombian Native Americans. Prehistoric mining tools have been found in some of the old workings of the turquoise mines in San Bernardino County. Surely there is prehistoric Turquoise Jewelry featuring California Turquoise.

Over the years, the State's deposits have produced a substantial amount of turquoise. Deposits are located in San Bernardino, Imperial, and Inyo Counties. The material occurs as nodules and as vein filling. Most of the nodules are small in size, about the size of the end of your thumb, and the vein material is about 4 millimeters thick. In the better grade materials, the color varies from a pale to a dark blue, poorer grade materials are greenish-blue and green in color. Some of the material has yellow-brown limonite spider webbing.

In the past, a number of turquoise mines operated in the State, several mines in each of the counties. Today, only a few are mine, and produce commercial Turquoise, none of which is easy to find. California Turquoise is really not marketed much at all.

California also has instances of Variscite. 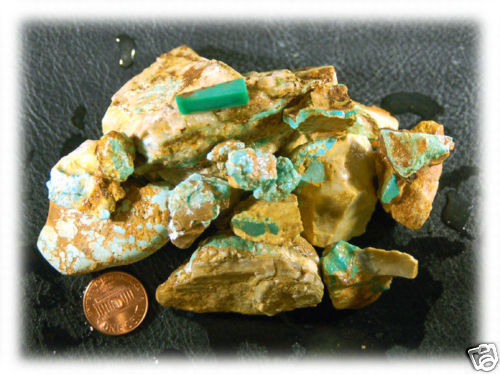 This mine has been mined since the anasazi times. It was rediscovered in the 60's by Ed Nazelrod and is still in limited production today by the Nazelrod Family, mainly done with hand tools. I have received a small amount of this from an associate and it is really great stuff. It is mostly a light robin's egg blue with a golden yellow open web or "island like" matrix.

STARQUEST GROVE MINE or GROVE TURQUOISE MINE

TOLTEC (Tiffany) MINE
Another one of the Tiffany Company's interests in turquoise and turquoise mines. They mined this for a while back in the 50s and 60s and it now lays dormant for the time being. At one time Tiffany Company made a lot of Turquoise Jewelry with natural American turquoise. It is located on Turquoise Mtn. in back of the Apache Canyon Mine outside of Baker, California. As far as its production, it produced the same look as the Royal Blue or what is now known as Royston's high grade hill. Tiffany's owned in the Royston District in Nevada.

Back to the Learning Center