The Hartman's of Durango Silver Company have been collecting, mining and cutting American Turquoise for over 40 years - our specialty has always been Top quality Turquoise from Arizona, Nevada, Colorado and New Mexico. This is an informational page about American Turquoise and Turquoise Gem Stones created by John Hartman, a leading authority on Turquoise. 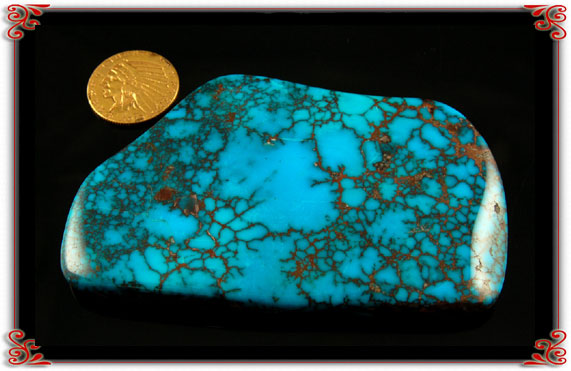 Above and to the left is a beautiful Turquoise cabochon from the Kings Manassa Turquoise Mine which is located near Manassa, Colorado USA. This specimen was hand cut by Bill King, the owner of the Kings Manassa Turquoise Mine for many decades. Bill has been a good friend of the Hartmans for over 40 years, John, Dillon and Bill are great friends that go way back and cherish many great experience from their colorful past.

Above and to the left is a 19 carat water-webbed Morenci Turquoise cabochon with wonderful character. This beautiful gemstone was cut by Dillon Hartman in March of 2013, it came from a rock I purchased from the Brown Turquoise Company, which was located in Gallup, NM, in 1974. In this period of time I was buying beer flats of Morenci Turquoise from the Browns and as I recall, I was paying about 120.00 per pound - I was able to hand pick the Turquoise at that time. It was mostly wafer material with a fair amount of iron pyrite matrix, I also purchased larger rocks that were deep blue with heavy iron pyrite spiderweb matrix for $250.00 per LB, however, the highgrade was very limited.

Above and to the right is an enhanced Turquoise Stone from the Kingman Turquoise Mine. There is good reason to stabilize some types of Turquoise - often Turquoise is to soft to use in Jewelry and by using acrylic or oil base resins to stabilize the rock it becomes hard and great for use in Jewelry. Typically, enhanced gemstones of any type are not natural and therefore their value is much less then high quality gemstones - Turquoise is no exception. In the case of this Turquoise stone, it is beautiful and very attractive, this Turquoise Stone does have good value being worth about 1/3 of what it would be if it was natural.

To the above left are three Turquoise Stones from the Number 8 Mine that was located in Northern Nevada, near Battle Mountain. This Turquoise was mined by Cutler Edgar in the late 50's and well into the 1960's. Estell (my wife) and I were very fortunate to mine Stormy Mountain Turquoise with Cutler, he had great stories about Turquoise mining and was a great guy. We got hundreds of pounds of Turquoise from Cutler in the 70's - Stormy Mountain, Number 8 and more. This Number 8 came from Cutler Edgar of Battle Mountain, Nevada.

Above and to the right are two chartreuse colored Turquoise Stones from the Orvil Jack Turquoise mine that was located Crescent Valley, Nevada. The actual mine that lime green Orvil Jack faustite came from was call the Blue Ridge Mine, which produced beautiful blue Turquoise with black spiderweb matrix. To read a good Orvil Jack story follow this link.

Above and to the right is a deep blue Turquoise Stone from an old Nevada Turquoise Mine known back in the day as Montezuma and is now called Pilot Mountain. There is a tremendous amount of Turquoise that is from mines that have had their name changed through thier existence most of the time these stones are unidentified when purchased, we can conclude an approximate area the stone came out of but often it is just a good guess. Turquoise in most Nevada Mines can vary dramatically from different areas of the mine, often there will be a lot of the same color, matrix configuration and character in the rock and then you will find areas the the Turquoise will have a completely different look. 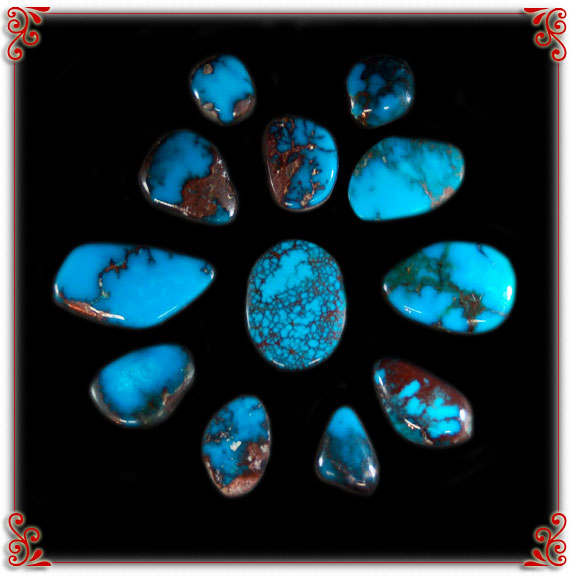 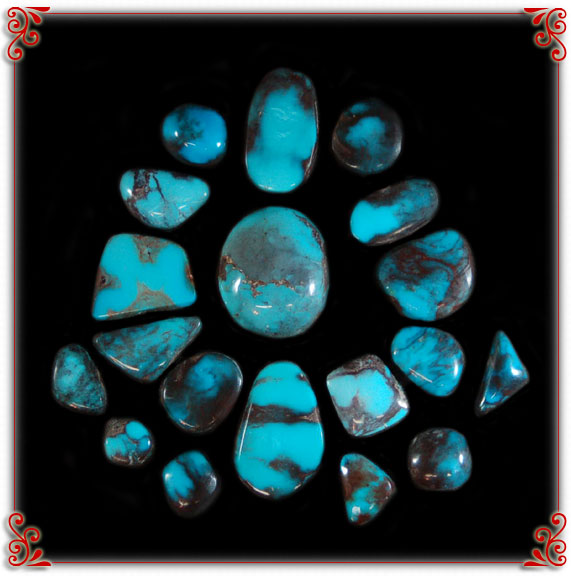 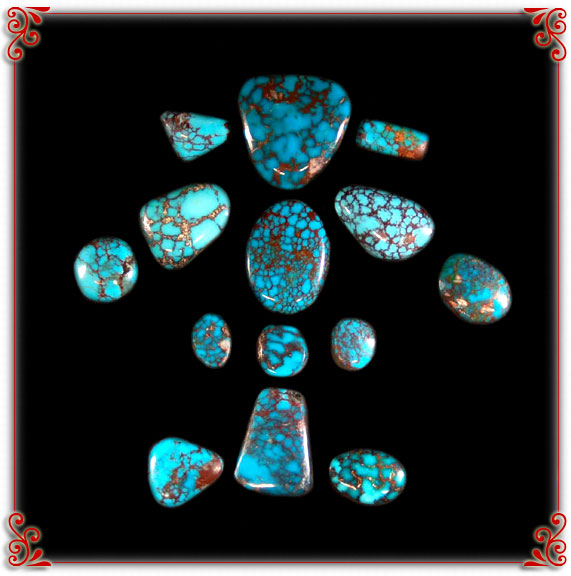 The photo above shows you many different examples of Bisbee Turquoise with spiderweb matrix. You can also see several stones with red matrix, the red coloring is caused from high iron concentrates, it is rare and it is beautiful when found in Turquoise.

The State of American Turquoise and Turquoise Stones (2013)

When you look at the variations of Turquoise that has come out of the ground in North America, it is truly astonishing! The blue color range that that is found from southern Arizona all the way up through northern Nevada is memorizing. The luscious green hues from lime green, emerald green and Turquoise greens that come out of Nevada, Colorado and New Mexico are breath taking. American Turquoise Mines have it all - every variation of Turquoise anyone in the world could desire.

The relentless thirst for American Turquoise Jewelry in the United States since the opening of Grand Canyon National Park, through the Roaring 20's and throughout the Hollywood Movie era pushed for perfection in both Jewelry design as well as quality Turquoise. By 1970, there were over 180 active Turquoise Mines in the United States working hard to produce the finest Turquoise the world had seen to date. The Native American Turquoise Jewelry market was so brisk that a major Jewelry producing industry had developed throughout the American Southwest in this period of time as well.

In 1985, Chinese Turquoise made is debut at the Tucson Gem and Mineral Show. The initial Turquoise that came to the U.S. was from an accumulation of what the Chinese considered inferior in the past due to it's having matrix, host rock. After hundreds of years out of the mine the Turquoise became hardened and of very high grade, plus the bulk of the material was rich blue spiderweb Turquoise. American Turquoise and Turquoise Jewelry collectors went nuts over this Turquoise which began a whole new era in the Turquoise Jewelry industry of the United States and then the world.

Shortly, the good stuff ran out and when they began pulling more Turquoise out of the mines they found that the quality was nowhere near as good. By the mid 90's, the Chinese had flooded the world with their inferior Turquoise and the price of Chinese Turquoise dropped so low that it put most all American Turquoise Miners out of business. The Chinese continued flooding the market and then began to make fake Turquoise by using magnisite and howlite, dying it and treating it with acrylic and plastic resins. Today, the Chinese government put a halt on all mining of Turquoise and we have heard they are revoking export licensees of those involved in exporting Turquoise. We can only imagine, will they allow the exporting of fake Turquoise!

Today, the public, American Turquoise Collectors and Jewelry Connoisseur's are waking up to the fact - Authentic Natural American Highgrade Turquoise has become very scarce. The reason? Turquoise Mining, for the most part, has come to an end over the past 20 years and it will take some doing to get mining going again. Between government restrictions and the cost to mine, Turquoise will have to increase in value substantially or it simply will not happen.

Turquoise is one of the most beautiful gemstones on earth, it was also one of the first gemstones found by man. It has been the belief of spiritual leaders of the world, throughout history, Turquoise possesses metaphysical powers which bring its bearers good health, happiness and fortune. Our entire family is a testament to this! we believe our lives have truly been blessed!

There are relatively few authorities on authentic, high quality, Turquoise - I have come to this qualification due to the fact that I have been engulfed in Turquoise for most of my life, I have collected, mined, cut and dealt heavily in American Turquoise for well over 40 years. I offer my consulting and accusation services to well qualified buyers.

We invite you to learn more about Turquoise Stones by following the links in our Learning Center to other informational pages we have written on different topics directly related to Turquoise Stones. In addition, we invite you to join our E-Mail Newsletter - about once every other month we send out a Newsletter to inform our members of what's happening with Durango Silver Company, new products, specials for our members only and more. We also have a monthly drawing from our member base to give away free Turquoise Jewelry from our company. Please take a moment to become one of our friends by signing in below. We hope you have enjoyed our presentation on Turquoise Stones and have gained some useful knowledge from it.