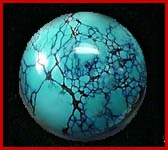 Chinese Turquoise has become the most widely used Turquoise in the world. There is evidence of turquoise use in China dating at least as far back as 1700 BC as evidenced by a bronze plaque with turquoise overlay from the Erlitou culture site in Menan Province displayed at the Academy of Social Sciences in Beijing. Although some Turquoise was mined in China in ancient times, more commonly it was acquired in trade with Mongols, Persians, and Turks. Mostly the Chinese used turquoise for carvings and other art. Jade has been the preferred stone for jewelry in Chinese culture. The Tibetians, on the other hand, have preferred turquoise to any other gemstone and virtually every Tibetian possesses some turquoise. Believed to bring good luck, it is worn set in rings and bracelets, as beads in necklaces, and as adornment directly on hats and other clothing. Domestic animals such as horses wear necklaces of felt with turquoise sewn on. Today China has mines that produce a great deal of turquoise. Northwest of Shanghai is the Ma'ashan turquoise mine, and the Hubei Province produces turquoise in colors reminiscent of the now closed mines in Nevada. This turquoise ranges in color from sky blue to spring green as well. Today there are no known producing mines.Chinese Turquoise has usually been stabilized, meaning a clear epoxy has been applied to the surface to harden the stone before setting. A side effect of the process is that stabilized stone is less likely to absorb lotions and body oils, which may change the color of the stone over time. Turquoise from mines in China accounts for about 80% of the stone on the U.S. market today, due to the scarcity of American turquoise. Only a handful of turquoise mines in the American southwest are commercially operating. Unfortunately this turquoise and its dealers has put most of the American miners out of business. We just can't make a dollar or two per day breaking our backs! It is a shame that the Chinese did not treat these mines with respect, they could have been the Debeers of Turquoise, when this stuff first hit the market there was material that you could not tell was Chinese or Lander Blue. Great stuff, I can't wait till the American market appreciates it more. Chinese Turquoise is simular to American Turquoise in that the mines produce Turquoise in almost every color and matrix variation. 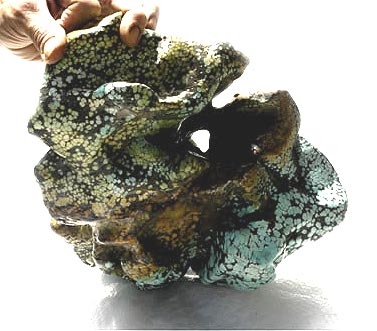 Turquoise was never as popular in China as Jade until recently. But here in the United States some of the finest Turquoise ever sold has come from China. Chinese Turquoise ranges in color from all shades of green, to light blue, to a beautiful dark blue. Much of the material has a dark brown or black matrix and may also have a beautiful spider webbing. Infact, China seemed to produce the highest amount of spiderweb Turquoise thus far. Some of the high-grade Chinese turquoise resembles and is thought to be equal to many of the better known or classic American Southwestern mines. Recently Turquoise in China has been produced at the Maanshan mine northwest of Shanghai and mines in the Hubei province. Two of the finest mines in the Hubei province are the Yungai, which means, "a mountain covered with cloud" and the Zhuxi "a mountain where growing plenty of bamboo". The Yungai, or Cloud Mountain has produced natural Turquoise that is equal to a number of the finer Nevada mines that are now closed. Mines like the Nevada Blue, Number 8, Blue Ridge and the famous Lander Blue. Yungai or Cloud Mountain is now closed. 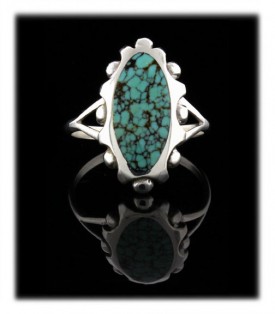 It has been said that today, Turquoise from China accounts for over 60% of the stones sold in the United States, due to the scarcity of American turquoise. There is an irony to the abundance of Chinese Turquoise in America as most all of the China Turquoise sold is stabilized with plastic or treated in some way thus making the availability of natural Chinese Turquoise rare in today's market.

Soon, even stabilized Chinese Turquoise will become scarce in America. This is for a few reasons, China has closed off most of it's mines to the miners and owners of the rights to the Turquoise. The second reson that it will become hard to get Chinese Turquoise is the facet that the Chinese themselves have taken a major liking to Turquoise in the last few years. The Chinese market is sucking up all the Turquoise it can get its hands on. In 2013 and 2014 the Chinese have begun to experience a major Turquoise Jewelry fashion trend, much like the trend of the 1960's and 70's in the USA, only there is a much larger population in China. In two years, the Chinese have depleted almost all the Sleeping Beauty Turquoise that was left once the mine closed in 2012. It hard to say what is happening in China with the Chinese Turquoise, but you can probably guess it is the same scenerio. Chinese Turquoise will become 10-20 times more valueable, and has already started to bring 5 times what it was bringing in the US in 2012 in 2014 in China. Now is the time to buy, mark our words (written in 2014).