The Manassa Turquoise mine was originally called the Lickskillet Mine. It was one of the first Turquoise deposits found in Colorado and the Southwest as well. The Manassa mine is believed to first have been mine by the Anasazi Indians.

Manassa Turquoise was mined at Manassa in south central Colorado. Manassa Turquoise is known for its blue-green to green color with a golden or brown, non-webbed matrix. It runs primarily in veins hosted by a beautiful golden brown hard rock. It takes a skilled stone cutter to get the Turquoise out of this hard rock.

This stone is a favorite of gold and silversmiths in the southwest, when they can get it! The mining at the Manassa Turquoise mine at this time, is at a stand still. Most of the Colorado Turquoise mines are not operational at this time.

The Manassa Turquoise mine was originally found by I.P. King and passed down to his son, and then to his grandson and current owner, Bill King. Bill has has spent his entire life in the Turquoise business and has mined Manassa turquoise, Pilot Mountain Turquoise mine, and many others. Bill King is a wealth of information about turquoise and one of the last old time miners. He is a wonderful stone cutter and a wonderful miner as well. These days Bill cuts his Manassa Turquoise and has it made into Native American Indian Jewelry.

History of the King's Manassa Mine from Bill King 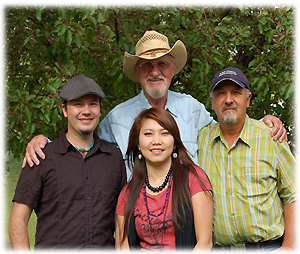 This is the story about the Manassa Turquoise Mine as told to me, John Hartman, from Bill King which has been the owner of the mine to date, 2010. I have been close friends with Bill and his family for over 30 years and have great respect for him. Bill is in his mid 70’s now and has spent his entire life in the Turquoise business.
The Manassa Turquoise Mine was one of the first deposits of Turquoise found by the Native American Indians over 1000 years ago. It shares this title with the Cerrillos Hills Turquoise deposits just southeast approximately 125 miles as the Crow flies.

I.P. mined Turquoise from the Lick Skillet mine but there was a small market for it and had business arrangement or partnership with a doctor in the area. The doctor would send his patients over to the Mine to have them work off their bill if they could not pay it. They did take a fair amount of Turquoise out and must have taken it to Santa Fe as that was a major Trade hub in those days.
I.P. just disappeared one day in 1909 leaving his wife (Emma) and nine children behind. Bill believes it is possible that I.P. and Monroe (his son in law) may have gotten into a fight at the mine and Monroe may have killed him. Bill believes his grandfather’s body is down in the bottom of the mine to date.

Charles King was the second son of I.P. and inherited the Manassa Turquoise Mine. It is not known if Charles did much in the Turquoise business and as it was hard times in his days it was probable that he did not.
Pete King, born 1907, was one of the sons of Charles king and was Bill Kings father. Pete was very interested in Turquoise and apparently there was a market for it in his times. By the early 1930’s, Pete built the first Turquoise cutting shop in Manassa Colorado to cut Lick Skillet / Manassa Turquoise. He built his own cutting machines, sanders and polishing machines by hand and created a full production Turquoise Gemstone cutting business.
Bill King was born in 1933 in Manassa Colorado. He spent all of his childhood years and went to school there as well. Bill remembers his father Pete was a Turquoise cutter and it was his main occupation while Bill was growing up as a child.  Bill would spend a lot of time in the cutting shop milling around and watching his father cut beautiful Turquoise Gemstones from the Lick Skillet Mine. He admired and respected Turquoise as it was his father’s way of life and how his family made a living. 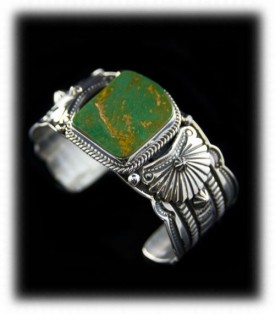 In the late 30’s, Pete hit the biggest pocket of high quality Turquoise that was ever found at the Lick Skillet / Manassa Mine. The Turquoise Jewelry business was going strong by then and he was doing very well mining and cutting Manassa Turquoise. In 1943, Pete was drafted into the U. S. Military and went off to world war two. When he finally came home his two brothers had worked the mine clean and had sold off Pete’s Turquoise Cash.

Pete took the mining claim at Manassa back and worked hard but could not find another cash of Turquoise at the Lick skillet Mine. He left Manassa for Tonapah, Nevada and mined the Easter Blue Mine in the Royston Hills. After a couple of years he came back to Manassa after breaking his leg and losing most of his money in Nevada and was laid up for quite a period. He moved to Albuquerque in the 1960’s and founded Pete King’s Jewelry Company.

Bill went to work cutting Turquoise on his own after getting married. He set up several small cutting shops around Manassa in chicken coups, garages and where ever he could find a place to cut. He would take the cut Turquoise Stones down to Santa Fe, Albuquerque and the Rio Grande Valley to sell.

In 1957, Bill and Mary King move down to Los Lunas New Mexico, which is close to Albuquerque. Bill was in his prime by that time cutting Manassa Turquoise, Morenci, Blue Gem and others based on the demand of the Turquoise Jewelry marketplace. Bill was not only ambitious cutting Turquoise, he also built his homestead in Los Lunas for himself and Mary. The King's started their family in Los Lunas.

When Morenci Turquoise became popular in the late 1960’s there was a big demand for it in Turquoise Jewelry. Morenci Turquoise ran in thin veins and was hard to cut as it would easily break due to its thinness. Bill got the idea of backing the Turquoise and got his first backing material from the Western Auto Store. It worked great and provided a way to use utilize the beautiful thin Morenci Turquoise that was in demand by the public. He brought his backed Turquoise to Gallup New Mexico and showed it to Tobe Turpin. Tobe tried it and told Bill he would buy all Bill could cut as he believed it was the answer to being able to use the most beautiful Morenci Turquoise in Turquoise Indian Jewelry.

Bill made a deal with Bill Brown who was the main distributer of Morenci Turquoise to save all of the thin Morenci high grade Turquoise for him. A new era in Turquoise cabbing began as the backed stones were much more durable, less breakage, and the thin Turquoise could now be used in Indian Jewelry. Bills business took off big do to his breakthrough and he flourished in the Turquoise industry. Bill told me that prior to backing Turquoise he barely got by cutting Turquoise and when he started backing – he finally started making money and his stones actually made the American Turquoise Industry much more viable as the Turquoise that went into the Indian Jewelry had now become very stable and there was no longer the cracking and breakage of the Turquoise Stones that there had been prior to backing the material. Backing Turquoise proved to be the biggest breakthrough in the history of the Indian Jewelry business and Bill King was responsible for this great innovation.

Bill bought one of three claims from his Grandma King and the Gibson family got two others. Bills father had a claim between Bills and the Gibson which Bill ended up buying from his dad. Bill mined those two claims for quite a while but did not hit any large deposits, he figured out that the largest deposits were on the claims owned by the Gibsons. Cliff and Rick Gibson knew Bill wanted their claims and approached Bill to purchase them.

Bill has cut Turquoise from the Manassa Mine most of his life.

Burt King, Pete’s brother, was also interested in Turquoise and worked with Pete at some point. He later moved to Albuquerque and opened a stone cutting / Turquoise Jewelry manufacturing company which grew and did very well from the 1950’s on – It was called “Burt Kings.” Tim King continued Burt’s legacy and ran his Turquoise Indian Jewelry shop in Albuquerque called “Little Burt Kings” and did a brisk business until the late 1990’s.