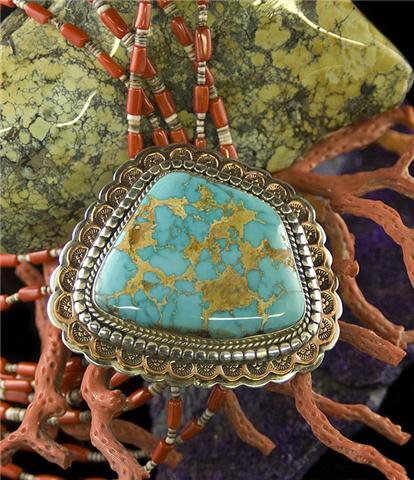 As you look at Silver Jewelry from Durango Silver Company you will notice we make Sterling Silver Jewelry of substantial weight and our Silver Mens Bracelets are no exception to this policy of our company. You will also notice that all of our Silver Turquoise Jewelry for men is created the same - with a substantial amount Silver.

Mens Gold Turquoise Rings have been a specialty of Durango Silver Company for nearly forty years. We produce many type of Mens Gold Rings from lost wax style like the Ring above to a variety of Southwestern styled Mens Gold Rings. The Ring above was created by John Hartman, it started with a wonderful Green Turquoise Stone and was made by applying layer after layer of molten Jewelers wax to create this artisan design. Once it was casted, John added Colorado Gold Nuggets on each side of the Ring.

As in the two Mens Silver and Turquoise Rings above, all of the Sterling Silver Mens Rings produced by Durango Silver Company are a heavier weight as we use a substantial amount of metal in our Turquoise Jewelry. Navajo Turquoise Mens Rings.

Southwestern Sterling Silver Mens Rings made with Silver and Gold in unison are becoming more popular as the two tone metal combination is good looking and when you ad Turquoise it makes a very attractive mens or women's Turquoise Ring. Durango Silver Company makes many different types of Silver and Gold Turquoise Jewelry such as Rings, Bracelets, Pendants and Necklaces, check our site out often to see new pieces as they are added. We have a wide selection of men's Turquoise Jewelry.

Durango Silver Co makes many types of Mens Silver Rings, this Mens Buffalo Ring is a classic from our company that has been produced for many years. It is a great Western styled Silver Mens Ring that many men like.

The Mens Ring on the left is a unique mens ring only made by Durango Silver Company, it is considered a Saddle Ring by design as it is completely round on the inside of the ring to fit the finger comfortably. The Mens Silver Ring on the right features a White Turquoise stone from the White Buffalo Turquoise Mine in Nevada. It is a large Mens Ring with substantial Silver work that is appreciated by men. Durango Silver Company is known for its large Mens Rings as we have produced a lot of them for nearly forty years.