The Mens Beaded Necklace on the right was also made with Tortoise Turquoise. This Beaded Turquoise Mens Necklace was made with graduated Turquoise disk beads which are attractive and handsome. This is a large set of beads that can be worn by a gentleman as a Beaded Choker Necklace.

Men do like to wear Turquoise Beads and most men like a shorter Beaded Necklace of about 18 - 20 inches.

The Turquoise Necklace Pendant on the right is Navajo Handcrafted with beautiful stamp work on Sterling Silver. It also has a Manassa Turquoise gemstone from Colorado. This is a more suttle Mens Necklace than the one to the left and would also be appreciated by most men.

Durango Silver Company also handles many types of Native American Indian handcrafted Mens Necklaces, if you are looking for something in particular that is not on our site, contact us to see if we can make one up for you or locate it through our sources. We work with Zuni Indians for Zuni Mens Jewelry and Navajo Indians for Mens Necklaces, Bolos, Buckles and more.

The Turquoise Bead Necklace on the right was made with rounded blue Turquoise Nuggets mixed wiht different smaller gemstone beads including Spiny Oyster Shell Beads. This is an attractive blue mens Turquoise Necklace and will look handsome on a gent. 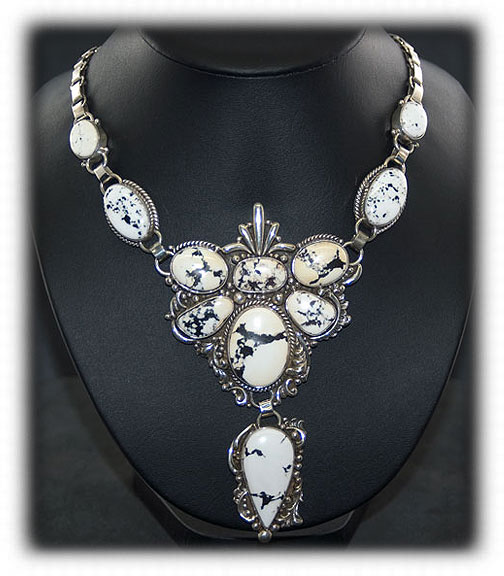 We hope you have enjoyed our presentation on Mens Turquoise Necklaces and have gained some useful knowledge from it. We invite you to learn more about Turquoise, Turquoise Jewelry and Mens Turquoise Jewelry by following the links in our Learning Center to other informational pages that we have written on different topics related to Turquoise Jewelry. In addition, we would like to invite you to join our E-Mail Newsletter - about once every other month we send out a Newsletter to inform our members of what's happening with Durango Silver Company, new products, specials for our members and more. We also have a monthly drawing from our member base to give away free Turquoise Jewelry from our company. Please take a moment to become one of our friends by signing in below.