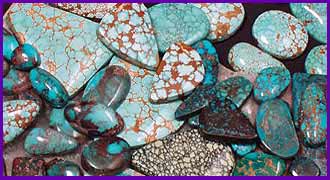 This is an informational page on the Turquoise Crisis we are experiancing in 2013. There has been a chain of events that has led to a new global awareness of Turquoise and there has also been a chain of events that has led us to a major shortage of authentic American Turquoise from the Southwestern United States as well as Turquoise from other regions around the world. This situation will, without a doubt, have an impact on the future values and qualities of the Turquoise and Turquoise Jewelry that will be available in the marketplace.

In the early 1970's, Hollywood and the media brought on the biggest Turquoise Jewelry rush of all times. It was also in the 1970's when the Tucson Gem and Mineral Show grew to the Tucson Community Center and Turquoise was the main gemstone being marketed by the dealers. The Gem Show has grown in leaps and bounds much like the Turquoise Jewelry industry has and in 2013 there were over 50 different show locations with over 20,000 dealers - it was the first year in history when there was not enough Turquoise to supply the buyers that came for it. In fact, the little amount of Turquoise that was at the show brought over triple the price as it did in 2012. Here in the Southwest it is nearly impossible to find any authentic, natural, high quality Turquoise rough and/or cut stones - a real Turquoise Crisis!

Turquoise from China was brought into the United States and was a big hit at the Tucson Gem and Mineral Show in 1985. By 1990, there were hundreds of dealers selling Chinese Turquoise and the Chinese were also representing their Turquoise at the show. Chinese Turquoise was marketed around the world at the same time it was taking over our Turquoise market in the United States and by doing this they created a worldwide awareness for Turquoise. Turquoise has now become one of the ten most popular gemstones on earth - including in their own country!

In the United States, as of January 1st, 2013, there is only one actively producing Turquoise Mine left out of over one hundred and eighty producing Turquoise Mines in 1985. China, the worlds largest producer of Turquoise since 1985, put a moratorium on future mining of Turquoise over one year ago. Turquoise coming out of Iran, (Persian Turquoise,) came to an end several years ago with no change in site for the future. Egyptian, Tibetan and other known Turquoise producing areas of the world have not been produced in volume for many years. Turquoise coming out of Mexico is limited due to termoil and unrest. The bottom line is that, at this date, there is not enough Turquoise being mined to fill the domestic or the international demand.

Since China put a moratorium on the mining of Turquoise, we now have a worldwide Turquoise Crisis!

What is the cause of the Turquoise Crisis

When the Chinese found this great market for their Turquoise, they went for it! At the time, the Chinese were on a different economic scale than most of the world. The majority of their working class made around a dollar per day in wages, there were very few manufacturing restrictions and no red tape. This allowed Turquoise, as well as many other exports to be able to be maketed to a global audiance at fantastic discounts from other products being made elsewhere in the world.

We are now seeing major problems from this situation. Many of the American Turquoise Miners have now moved on to new occupations and many have diseased as well. The U.S. Government has new restrictions on mining and this makes it difficult to even search for Turquoise in the United States. The cost of mining has escalated dramatically as well, mining permits, fuel and general costs of running the mining equiptment has went up exponentially. Things have changee dramatically in 20 years and we have a complex situation on our hands - we have a Turquoise Crisis!

Is there a solution to this Turquoise Crisis? At this time, mining Turquoise is still allowed in the United States but the red tape is a lengthy process, mining permits are expensive and the cost of mining has gone through the roof. It would take a tremendous amount of work to reclaim the old Turquoise Mines as the Turquoise was hidden when the old miners shut them down. Finding new Turquoise deposits is even harder to do than reclaiming the old. However we look at it, there is no doubt it will take a good amount of time to get the production of Turquoise from American Turquoise Mines back up and producing substancial amounts of Turquoise in the future.

As we see it, the value of Turquoise will have to reach a level that will make it attractive enough for new miners to get out there and get these Turquoise Mines producing again. The interest and demand for Turquoise is higher than it has ever been in the history of the world and now it is in demand worldwide. There are good amounts of American Turquoise still in the ground and when the time is right it will be mined again. Until then, you can expect Turquoise and Turquoise Jewelry to escalate in value and become a little scarce!

We invite you to take a look at a few of our other presentations - Turquoise Jewelry, Learning Center and our American Turquoise page.

We invite you to learn more about The Turquoise Crisiss and American Turquoise Jewelry by following the links in our Learning Center to other informational pages we have written on different topics directly related to Turquoise and Turquoise Jewelry. In addition, we would like to invite you to join our E-Mail Newsletter - about once every other month we send out a Newsletter to inform our members of what's happening with Durango Silver Company, new products, specials for our members and more. We also have a monthly drawing from our member base to give away free Turquoise Jewelry from our company. Please take a moment to become one of our friends by signing in below. We hope you have enjoyed our presentation on The Turquoise Crisiss and have gained some useful knowledge from it.