Example Pictures are not necessarily the highest of grade, rather a good example of a common look from a particular

Cerrillos is not only an uncommon and unique form of native New Mexican turquoise, but has a history entwined with both ancient Native peoples of the Southwest and more recent American mining companies. Cerrillos turquoise was created and mined under unusual circumstances. It is the only turquoise that formed at the base of a volcano. Thus, a variety of colors developed from the minerals in the various volcanic host stones. In fact, the Cerrillos New Mexico Turquoise mines produce seventy-five colors, from tan to khaki-green to rich, blue-green to bright and light colors. Cerrillos is a very hard stone and so takes a brilliant polish.In addition to producing a distinctive stone, the Cerrillos mine is the oldest mine of any kind in North America. Located ten miles south of Santa Fe, it was the site of the largest prehistoric mining activity on the continent because the huge turquoise deposit was partially exposed at the surface. Miners from the San Marcos Pueblo, who later moved to Santo Domingo Pueblo south of Santa Fe, most heavily worked the mine. Using only stone axes, mauls, antler picks, and chisels, Pueblo miners removed 100,000 tons of solid rock to create a pit mine 200 feet deep. They dug other vertical shafts into the ground to reach veins of turquoise. Miners carried tools and leather rock buckets on their backs as they climbed in and out of the shafts using notched logs as ladders. The turquoise obtained from this hard work traded among early peoples from Mexico to the Midwest and from the east to west coasts. In New Mexico, many pieces of Cerrillos turquoise for personal and trade use have been unearthed in the prehistoric ruins of Pueblo Bonito in Chaco Canyon. The Pueblo peoples continued to extract turquoise from the Cerrillos mine until the 1870's when a silver mining boom raised interest in the area. The Tiffany Company in New York and its associates bought up the mine area and extracted $2,000,000 worth of turquoise between 1892 and 1899.

Links: List of the Actual Claims in Cerrillos District 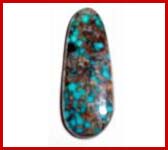 The mine discovered in 1996, by a gold miner while prospecting, is named the Lost Mine of Enchantment. It is located in a mining district near the town of Ruidoso in the Sacramento Mountains of southeastern New Mexico. It is the first new mine discovered in New Mexico since the days of Coronado in the 1500's. Enchantment turquoise is a high quality turquoise that often shows a deep green color with tan or golden brown matrix, but can range to a deep, rich blue. The green is influenced by the iron content in the stone, the blue by the copper content. This stone makes wonderful Turquoise Jewelry. Enchantment Turquoise is one of the harder New Mexico Turquoise mines to get turquoise from. This stone is mostly seen in Navajo Jewelry, but sometimes in Zuni Indian Jewelry, Hopi Native American Jewelry and Santo Domingo beads- Nogal District - Lincoln County
- Lost Mine of Enchantment
- Parsons' (Hopeful) Mine 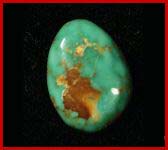 The Hachita turquoise mining activity dates from pre-historic to 1905. Like Tyrone turquoise, Hachita was also called "Azure", but also went by many other names. It is located in New Mexico. You will find a bit of Hachita in Turquoise Jewelry today and vintage turquoise jewelry. Hachita is one of the harder New Mexico Turquoise Mines to get turquoise from. 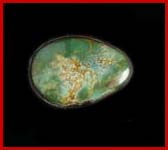 In the rugged boot hills of southern New Mexico, this very rough and beautiful place full of endless hills of Century plants, lies the now defunct High Lonesome Turquoise Mine. High Lonesome, the name painted on a watering tank, is quite appropriate- the land is very high and mostly lonesome. For over 30 years, from sun up to sun down, owner Ray and his crew looked for the beautiful, very hard, green to powder blue turquoise in six week stretches. The Hachita Mountains (Little Hatchet) holds evidence of prehistoric attempts to recover the coveted "sky stone". There may still be undescovered New Mexico Turquoise Mines in the Hachita Mountains.

The Johnny Bull Mine 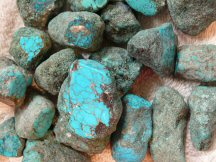 Located in Southeastern New Mexico in Hidalgo County, N.M. SAN SIMON MINING DISTRICT. This mine used to produce light blue to medium blue turquoise predominately bearing brownish matrix. Specimens can still be found here, maybe more with the right papers and machinery? Calcite is also abundant in this mine. There are five other abandon claims in this area. Lots of possibilities for Turquoise jewelry. This is one of the only New Mexico Turquoise Mines we have heard you can rock hound in. 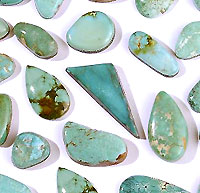 A wonderful New Mexico turquoise mine. Very similar to the wonderful Tyrone Turquoise. In fact, this mine was very close to the Tyrone Turquoise Mine. This mine is no longer in production. Beautiful blue and green turquoise, some even has high grade gold ore as matrix. This is gorgeous in Silver Jewelry as well as Gold and Turquoise jewelry. The turquoise from the New Mexico Turquoise mine is top grade and some looks close to the best old Morenci that was on the market. 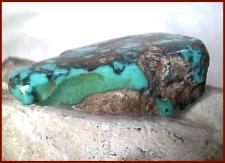 Turquoise from the Tyrone mine was associated with the copper mine operations southwest of Silver City, New Mexico. That mine is currently owned by Phelps Dodge. However, turquoise has not been retrieved from that mining operation since the early 1980's when Phelps Dodge changed its method of copper ore processing to crushing and acid wash. That method destroys any turquoise in the copper ore.
The Tyrone turquoise in new turquoise jewelry is from private stashes. It is medium brilliant blue in its high grade form. Tyrone turquoise is part of the mineral band that starts east of Silver City and curves around through Arizona and the Morenci turquoise mine area into Mexico. Today it is valued for both its beauty and rarity and is a real asset to silver jewelry. On of the greatest New Mexico Turquoise Mines.