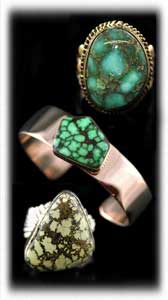 The Damale Turquoise mine also called the Damele, Damaile and Damali Turquoise mine is located in east central Nevada near the Carico Lake mine. Damele Turquoise is distinctive because of the zinc content that turns the stone yellow-green and increases its hardness in some cases. The yellow Damale Turquoise is fairly soft material, but is the material that tests possitively as Turquoise. The Damale Nevada Turquoise mine is most famous for the Damale or Damele Variscite and Faustite that is a vivid lime green and shocking Yellow - Lime Green. Most of the time this Lime Green Variscite is referred to as Lime Turquoise or Lime Green Turquoise. There is also real Lime Turquoise that comes from the Damale mine. The matrix of the maretial from Damele is webbed with a dark brown to black matrix. It's availability is limited because the mines are small. Due to its rare color, Damele is a collectible turquoise. The Damele Turquoise Mine also produces very beautiful Varasite, a beautiful, lime greenish to forest green very hard stone, most people know Damele for This stone rather then the Turquoise. There was another mine that was adjucent to the Prince Mine which was named Milky Way and the miner was sell Turquoise from this mine as Damaile Turquoise. This Damaile Mine was known more for the Turquoise the Variscite. In 2006, the Milky Way mine was stripped and robbed and that was the last of that material which was sold at a cut rate price the same year at all the major gem shows under all kinds of different names, including Candelaria Variscite. I love stones from both mines in Turquoise Jewelry and especially in gold turquoise jewelry. 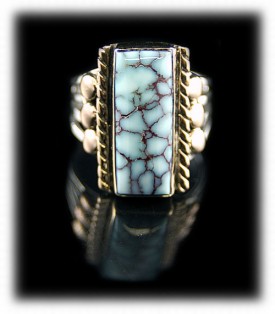 The Dry Creek mine, which has also been known as the Godber and Burnham mine, and now famous as the Dry Creek Mine, is located northeast of Austin, Nevada. The Dry Creek mine has yielded both a pale blue and a cream white Turquoise, but all does have a tint of blue. The stark what material was found to be Aluminite. The unusual white to light blue Turquoise is very hard. The color is due to a preponderance of aluminum rather than copper in the stone's chemistry. The matrix is typically light golden or brown-gray to gray-black. White turquoise, as it is called on the street, is beautiful alone in a piece of jewelry and is especially striking when juxtaposed with other colors of turquoise in a single gold or silver jewelry creation. Since their has been a lot of debate about White Turquoise, one should be clear that most feel there is no such thing as scientifical White Turquoise, it is more of street slang used to describe very pale Turquoise. Some unknowing Gallery owners and websites also Refer to Dry Creek Turquoise as "Sacred Buffalo", there is debate as to whether it was named this by the store owners and artists or by the Woods who owned the mine since 1999. Even though the "Sacred Buffalo Turquoise" name is commonly used for this material, expercts consider this name to be street slang for the material and there may be a seperate mine named Sacred Buffalo, but we have never seen it for sale or heard of such a mine from professionals in the business. We have only heard "hear say" about it. We have found most jewelers, store owners, and consumers are referring to Dry Creek Turquoise when they say "Sacred Buffalo Turquoise". 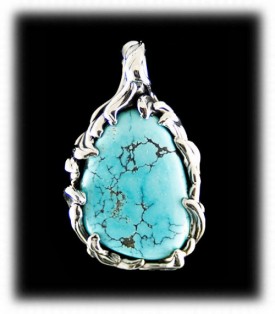 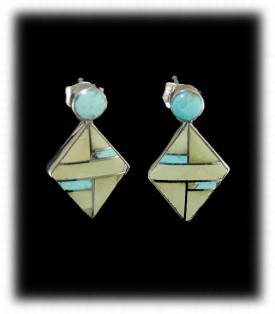 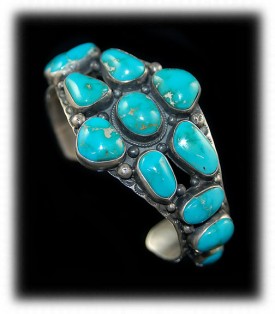 Fox is one of Nevada’s most productive and famous Turquoise mines. In the 1940’s, Dowell Ward purchased the old Cortez claims and developed them using the names Fox Turquoise, White Horse, Green Tree and Smith Turquoise to differentiate among the colors produced in the area and to create a larger perceived share of the turquoise market. The area produces a huge amount of good quality blue, green or blue-green stone with a distinctive matrix. Most of the Fox Turquoise comes out as nugget material. The nuggets from the Fox Turquoise mine are absolutely gorgeous, some bubbly and almost prettier in their natural state as a Turquoise Nugget. Most of this Turquoise that we have cut has been a light to medium blue with a darker color of green or blue spider web which is called water web. The Fox Turquoise Mine in Nevada also produces a beautiful clear blue with no matrix. Most of the Fox Turquoise material that has come out as of late is of the clear medium aqua blue variety. 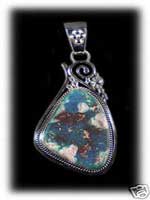 The Gilbert Mine in Nevada produces a beautiful dark blue extremely hard turquoise in a quarts host rock. The material from the Gilbert Nevada Turquoise mine has a dark to medium brown matrix that can even go into a reddish brown. This Turquoise almost has a Bisbee look to it if you have seen Bisbee in Quarts. The best way to know the difference is to have bought it from the miner unless you are a real expert on Turquoise varieties. Having said that, we have even seen so called Turquoise experts make mistakes. The Gilbert Turquoise Mine is a wonderful example of American Turquoise from Nevada. You will definitely see some of this being sold as Bisbee in Turquoise jewelry. 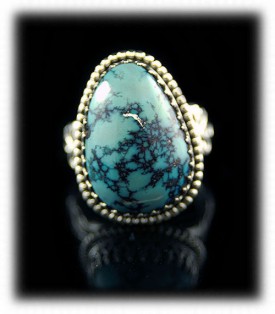 The Godber Turquoise Mine aka Burnham Turquoise Mine is one of Nevada's Best and most well known mines. This Godber Nevada Turquoise Mine produced some of the best material to ever come out of Nevada. The old time Godber Turquoise was a deep blue with a brownish spider web matrix. Some of the older Burnham Turquoise mine material is even prettier, dark blue with a green spider web matrix. Stunning! You can see some of this in high end old pawn silver jewelry and some gold and turquoise jewelry. Now this famous old Nevada Turquoise Mine is producing the Dry Creek Turquoise from a new find and is very famous for that material. There are a few of these Turquoise mines in Nevada that have been named several different things by different owners.

A small privately owned Nevada Turquoise mine that produced very little Turquoise. We are not sure whether or not This mine is still in production. Judging on the availability we are guessing it is not. Gold Acres is some of the finest blue Turquoise we have seen. Awesome matrix, a lot of the Turquoise is multi-colored. 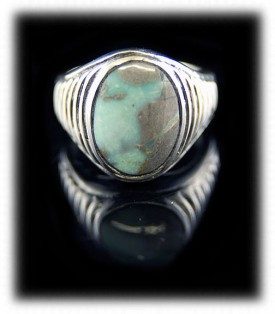 A Nevada Turquoise that has limited production. This turquoise was lost for a number of years, and rediscovered recently by the current owner. This stone is very hard, 8 on the mohs scale. It took ten years to find This mine. Usually a light Blue with triangle pattern matrix. This mine is owned and operated by Durango Silver Co. and Nevada Turquoise Company. Our latest finds here are yeilding some material that is Larimar blue with golden yellow matrix. Very pretty! 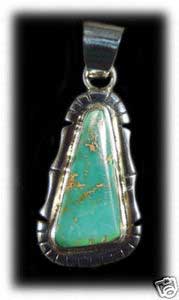 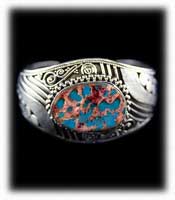 The Hidden Treasure mine is definitely as it is named. Yet another of the many very small Nevada Turquoise mines that is tucked away in the Nevada hills. This is a rare stone was hard to come by as this mine is not readily available in the commercial market. The Hidden Treasure mine was in active for many years. It is now called Cheyenne. Cheyenne is a relatively old inactive mine once called the "carrie" mine or "hidden treasure" mine. It was originally staked and mined for its silver and gold prospects. Tony and Trenton Otteson staked this claim several years ago to re-open the mine and gather the Cheyenne Turquoise found here. The Cheyenne turquoise formed here is a bi-product of the mineral seem and colors here cover nearly the entire spectrum in the turquoise world. Standing out from this mine is the green web and the blue web. This Cheyenne turquoise rivals any top mine for color and grade in the world.Nice stuff. The Cheyenne Turquoise mine is now owned by the Robbin's family. The Hidden Treasure Turquoise Mine produces turquoise that looks a lot like Arizona Turquoise. 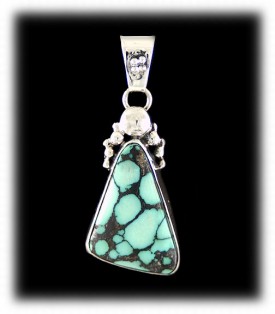 The Indian Blue Mine produces a medium colored finely webbed turquoise. The Indian Blue Turquoise mine produces a very fine product and is usually in a dark black chert. Nice stuff, haven't seen a lot, but what I saw was pretty dang nice. A lot of people love this kind of black spiderweb Turquoise that is indicitive to Nevada Turquoise Mines. The Indian Blue Turquoise mine appears to be a lost "Hat Mine" and I would not doubt if the majority of the material was sold as material from another more famous mine that would bring more money. This kind of behavior is common place in the Turquoise market. If a good amount of this Turquoise were ever to hit the market at the right price and get into some great jewelry there would be a very high demand for it. We would love to put more of this in our turquoise jewelry. 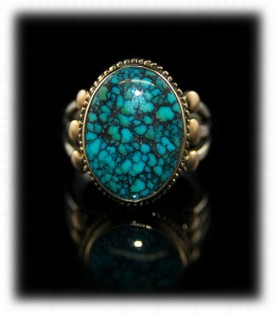 The Original Ivanhoe Mine was located on one of JW Edgars 1100 Acre Mining Leases in his Nevada area and had many beautiful shades of color. This little mine produced some beautiful stuff. The Edgars were one of the largest Turquoise mining families to ever work in the United States. The Edgars are synonomous with Nevada Turquoise and anyone who is anyone in the Turquoise world knows the Edgars or knows of them. Cutler Edgar was the first of the edgars to mine in Nevada and openned many fine old Turquoise mines such as the Stormy Mountain Turquoise mine. Today not much is known about the Ivanhoe Turquoise mine, it would not be suprising if it is not being worked or if it is being worked under a new name. 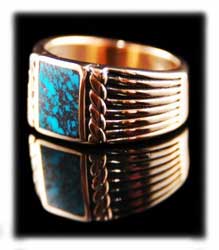 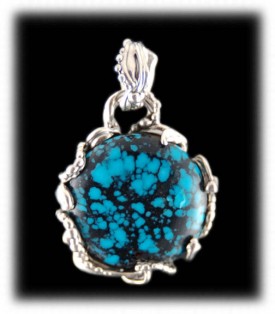 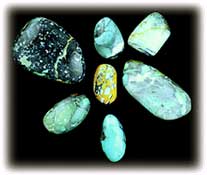 The Lazy Old Men Mine is located north of Austin, Nevada and has three co-owners who are located in the Reno, area. So far the Lazy Old Man Mine has produced a wide variety of variscite, turquoise, and some chalcociderite, and faustite. There is a lot of silica in the Lazy Old Man Mine so some of our material is quite hard, the host rock at the site is mostly shale but there are times when your working with a demolition hammer and sparks are flying because the silica content is so high. The material from the Lazy Old Man Mine resembles material from the New Landers mine, the Prince Turquoise Mine, and the Tortoise Turquoise Mines in Nevada as well as the Snowville Variscite material. A lot of what has come out so far is mint green in color and features a smoky black matrix or spiderweb matrix. This Nevada Turquoise mine is being worked currently and is relatively new. It will be exciting to watch it develope throughout the years. 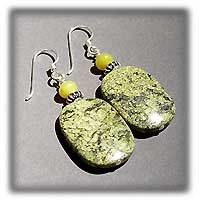 The Leaning Shack mine produces a light yellow to medium yellow green faustite, or to the retail customer "Yellow Turquoise". The Leaning Shack Mine has not been developed much as prior to the 2000s this material was not a hot commodity. As we all know Blue Turquoise is king, and this was especially true prior to the modern times. There were even times in the past where yellow turquoise, lime turquoise, and the like where thrown aside or into the tailings piles. Today, all of the odd colors of Turquoise are very popular, especially the limey greens and the yellows. The Leaning Shack mine delivers this type of gem in the form Faustite, Chalcociderite and Variscite. Most of the Leaning Shack Faustite looks very simular to the material coming out of Tibet right now that is actually called Lizardite. This is a small Nevada mine and is rare stuff due to the small production of this material. Nice material. This stuff makes some interesting silver jewelry, some of the most beautiful is the silver jewelry being made with Leaning Shack Yellow Faustite and purple Sugilite. 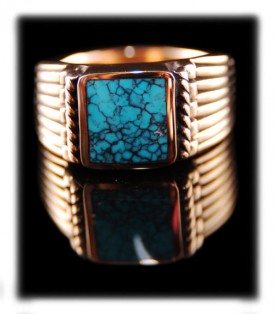 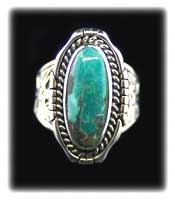