Variscite is becoming one of the most popular semi-precious gemstones on today's market.  You will see it being used in all styles of jewelry by all ethnicity of jewelers. 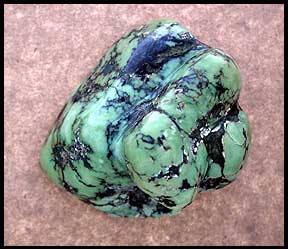 Variscite is considered to be one of the rarer and lesser-known collector's gemstones available today. Its appearance often causes it to be confused with Turquoise, but Variscite's color tends to be greener rather than blue. In some cases, materials may be marketed as 'variquoise', a name which combines 'turquoise' with 'variscite'. It is a relatively rare hydrated aluminum phosphate mineral, and gem-quality deposits and occurrences are considerably rare; only the highest quality material is used for gemstones and ornate carvings.

Variscite takes an excellent polish, often better than that of turquoise. It is most famous for its different shades of green caused by traces of chromium, although its colors can range from light bluish green to medium and dark green and, very occasionally, red.

Variscite is sometimes traded as 'utahlite', a trade name given in reference to Utah, the site of the USA's famed Variscite deposits. Utahlite is often cut and polished into smooth slabs and halved nodules.

On today's market the most popular type of Variscite is the spiderweb Variety which is a much higher grade.  The best spiderweb Variscite comes from Nevada and Snowville, 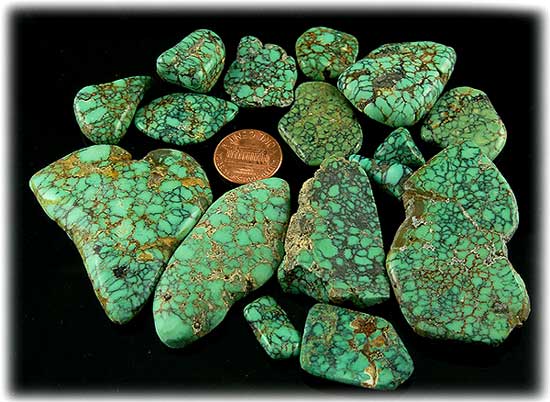 Utah.Variscite is named after 'Variscia', the historical name of the Vogtland district in Saxony, Germany. It was first discovered and described in 1837, when it was found in massive fine-grained aggregate form; crystals are extremely rare. Variscite is an end-member of the isomorphic row of variscite-strengite series of minerals. Like the garnet and feldspar groups, variscite-strengite minerals have an identical crystalline structure, but exhibit slightly varying composition. Owing to variscite's unique mode of occurrence, it is often formed and associated with other phosphate minerals, resulting in interesting veining, splotches and other coloring habits. Although all variscite is valued by collectors, emerald-green variscite from Utah and the black spider-webbed variscite from Nevada are among the most desirable gemmy materials.